Sorry! You missed Verite at Biltmore Cabaret - BC 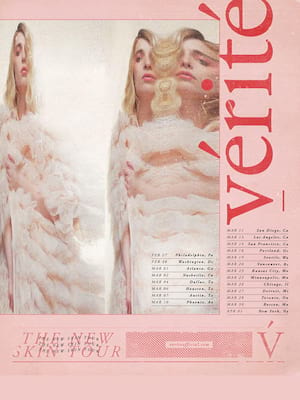 Verite is clearly reaching a new height artistically, she's able to deliver radio-ready alt-pop tunes, gilded with the finest glimmering gold but packed with the enveloping dark edge of an artist who is here to express herself, not write you another pop

Channeling the grunge-tinged angst of 90s alt-rock icons Nirvana, The Breeders and The Cranberries, Brooklyn-based singer-songwriter Kelsey Regina Byrne began writing her own music at the tender age of 16 and formed her own all-girl punk rock outfit. After graduating high school, she moved to the Big Apple and launched Verite whilst waiting tables at the Times Square Applebee's, but luckily didn't have to wait long for success. In 2014 her single Strange Enough became a viral hit, reaching number one on important tastemaking blog aggregator Hype Machine.

Back with her brand new sophomore album New Skin, Verite hits venues across North America this spring on the 2020 New Skin Tour. Fusing rich and ethereal vocals with electro-pop synth sounds and satisfying hooks, the album solidifies the songstress' status as a force to be reckoned with in the alt-pop scene. Balancing its delicate, glossy production with deeply personal and poetic lyrics and razor-sharp intelligence, Verite takes her art form to new heights on this latest offering.

Seen Verite? Loved it? Hated it?

Sound good to you? Share this page on social media and let your friends know about Verite at Biltmore Cabaret - BC.