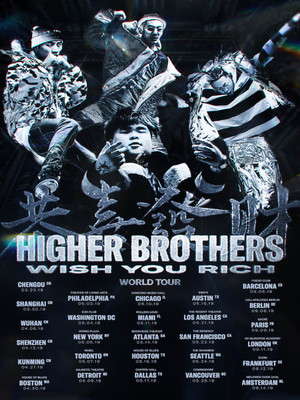 Together, the group is charismatic, and often surprising. They don't sound like any other Chinese rappers who have come before them.

Just after the Release of Five Stars, Higher Brothers Head on Tour

Higher Brothers are one of the few Chinese hip hop groups to make waves in America. The group who hail from Chengdu are signed to popular Asian label 88rising who also represent viral Indonesian rapper Rich Brian amongst other Asian or Asian-American artists. Higher Brothers will tour the world this year, with the US leg kicking off in Boston on April 30.

The tour comes just after the release of the group's sophomore album, 'Five Stars,' which features collabs from some of hip hop's finest including ScHoolboy Q, Soulja Boy, Ski Mask the Slump God. Hip Hop DX mentions how in the album, Higher Brothers "have notably improved their craft" yet "refuse to take themselves too seriously."

The Come Up Show Used under Creative Commons License

Sound good to you? Share this page on social media and let your friends know about Higher Brothers at Commodore Ballroom.