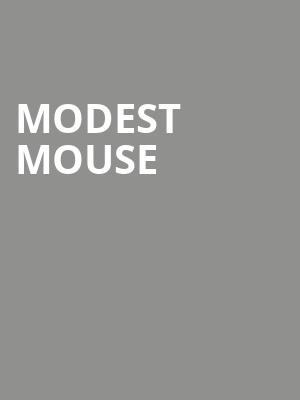 Making up for lost time

Back from a brand new album! Indie cult rockers Modest Mouse are back and ready to take on North America again with their latest tour dates! Catch them back on tour in Spring 2022 when they perform their older songs and hits as well as material from their brand new album, The Golden Casket. Don't miss seeing the Portland-based trio live near you soon!

Since 1993, Modest Mouse have been a by word for the ultimate in indie cool. With piercing and sometimes poignant lyric insights over crashing guitars, they made the mainstream with 1997's The Lonesome Crowded West but hit Platinum with 2004's Good News for People who Love Bad News that included alternative anthem 'Float On'.

I waited almost 20 years to see them I wanted to I just couldn’t and... more

Karnak: “ADD at the Palace”

Like everyone else here said, the sound was terrible. All I could hear... more

Sound good to you? Share this page on social media and let your friends know about Modest Mouse at Orpheum Theatre.