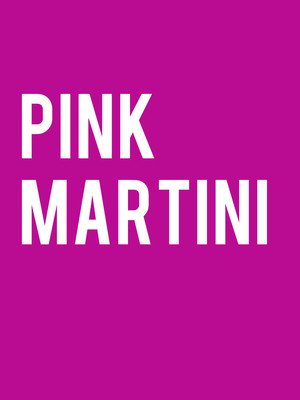 Pink Martini are the brainchild of Thomas Lauderdale, who in the early 1990s was thinking of running for Mayoral office. But he slowly became frustrated and fascinated by the musical entertainment during political society events. So he formed Pink Martini to address this and make music that appeals to everyone, from liberals to conservatives, all over the world. Over 20 years later, they're still going strong!

Since releasing their first single, Sympathique, they have recorded 8 studio albums and collaborated with artists as diverse as Gus Van Sant, The Von Trapp family, to Sesame Street. It's impossible to not be motivated by their distinct classical, Latin and jazz-infused output with multilingual lyrics. They are truly a band that can be enjoyed all over the world.

They are the most tallented, high educated, sophisticated young group,... more

Sound good to you? Share this page on social media and let your friends know about Pink Martini at Orpheum Theatre.