Sorry! You missed Rufus Wainwright with The Vancouver Symphony Orchestra at Orpheum Theatre 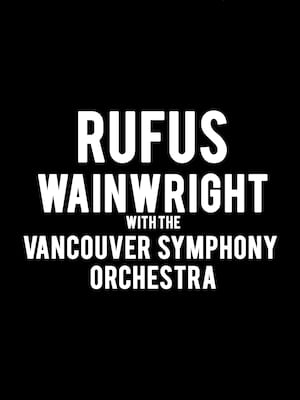 Why See Rufus Wainwright with The Vancouver Symphony Orchestra?

The illustrious and mesmerizing talents of Rufus Wainwright are illuminated in this upcoming concert with the Vancouver Symphony Orchestra. Quite simply one of the most unique male vocalists of his generation, don't miss this chance to hear Wainwright chart some of his wonderful hits both new and old, backed by the force of the entire company.

Wainwright's shows have become synonymous with a theatricality that underpins his bold, confessional style. Blessed with a deep tenor voice that's filled with emotion, he can, however, make a statement with a mere whisper. Son of Loudon Wainwright III and Kate McGarrigle, brother to musical sibling Martha, songwriting is in his blood. He remains firmly out of their shadows though, with a folk legacy of his own that includes seven studio albums and a fully-fledged opera.

Sound good to you? Share this page on social media and let your friends know about Rufus Wainwright with The Vancouver Symphony Orchestra at Orpheum Theatre.