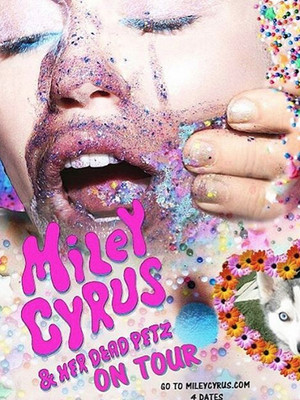 Following her headline-making hosting job at this years MTV VMA's, Miley announced the release of her surprise free album Miley Cyrus & Her Dead Petz. Maybe one of the strangest and most ambitious records released by a big pop star in recent times, it was a 23 track sprawl of genre-hopping madness co-written with psychedelic rock band The Flaming Lips. The Lips join Miley as her backing band on this series of intimate dates, which should showcase a very different side to Miley than her previous Bangerz tour.

Nashville-born Miley started her life in the public eye at age 11 by playing the lead in the Disney show, Hannah Montana, a role which required her to maintain Disney's 'girl next door' image. It's not surprising then that just a year after the show ended in 2011, Miley chopped off her long wholesome locks in favor of a bleached pixie haircut and her transformation into the sexy hip-pop star she is today began!

Sound good to you? Share this page on social media and let your friends know about Miley Cyrus at Queen Elizabeth Theatre.