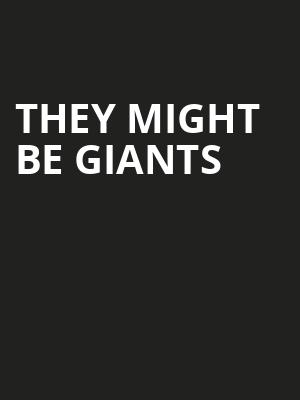 They Might Be Giants Used under Creative Commons License

Grammy award winning They Might Be Giants return to the road!

The Might Be Giants are back on the road!

1980s alternative rock band, They Might Be Giants, hit the road to celebrate the 30th Anniversary of their album Flood. The tour will include all-time fan favorite tracks from their epic career as they play the album in full. You should also expect spur-of-the-moment improvisations! No TMBG's tour is the same as the other.

All together, TMBG have released an incredible 20 albums. The band has also won two Grammy Awards and recently were nominated for a Tony Award for Best Original Score (Music and/or lyrics) Written for the Theatre for their work in Broadway's new musical SpongeBob SquarePants: The Musical.

This is a show you don't want to miss when they come to a town near you!

You may be required to wear a mask during this performance. Please contact the venue directly for more information.

I have long been a fan of TMBG, and I last saw them live in Auckland, New... more

So worth the wait! The theatre was a perfect setting for these brilliant... more

Sound good to you? Share this page on social media and let your friends know about They Might Be Giants at Commodore Ballroom.