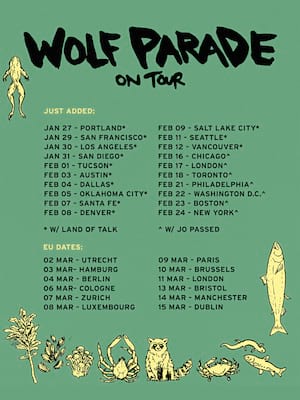 Indie rock band, Wolf Parade, released three full-length albums before taking a five-year hiatus in 2011. When Wolf Parade resurfaced, they brought a fourth full-length album with them, Cry Cry Cry, which was released October 2017. Now ready to unleash their newest, Thin Mind, catch the group as they take to the road once more in 2020.

Their soaring choruses and chaotic keys are what makes up Wolf Parade's sound. Thin Mind, coming in January 2020, is set to repeat this recipe - if the jangling dance beats of lead single Forest Green are anything to go by!

Photo by Aaron Paul on Unsplash

Sound good to you? Share this page on social media and let your friends know about Wolf Parade at Commodore Ballroom.