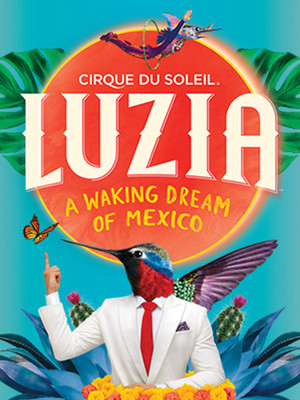 Inspired by Mexico's rich cultural heritage, Luzia is Cirque Du Soleil's 38th original production, and will be touring under a big top. Named after the Spanish words for light and rain, two elements which play a big part in the show, Luzia was co-written by Daniele Finzi Pasca (who also directs) and Julie Hamelin Finzi.

WHAT TO EXPECT FROM CIRQUE

Founded in 1984, Cirque Du Soleil has become a veritable empire, creating dozens of shows that have played to millions across the globe. Famed not only for their acrobatic prowess, Cirque shows always boast stunning design, make-up and costumes, all built around storylines that weave together elements from ancient mythology and fairytales. Alongside their own unique productions, such as Varekai and Kurios, they've frequently partnered with famous musical names, including The Beatles and Michael Jackson.

Two hours and five minutes performance, including a 25 minute intermission

Great new cirque show - gorgeous costumes and a look at Mexico in a non... more

The show was excellent. We bought the VIP experience and were disappointed... more

Sound good to you? Share this page on social media and let your friends know about Cirque du Soleil - Luzia at Grand Chapiteau at Concord Pacific Place.