Sorry! You missed Foals with Local Natives at PNE Forum 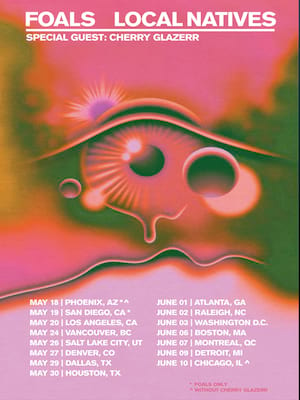 Why See Foals with Local Natives?

Two giants of indie rock, Foals and Local Natives, have announced a joint tour of North America in May 2020 with support from Cherry Glazerr. Kicking off the run of monumental shows in Los Angeles on May 20th, the 3-week trek takes in dates in Houston, Washington, Vancouver and many more.

The tour comes off the back of new releases from both bands, with British group Foals dropping not one but TWO albums in 2019 (Everything Not Saved Will Be Lost - Part 1 and Part 2 respectively), whilst LA-based Local Natives also released their new record Violet Street in April the same year. This is a unique chance to see two of indie's most loved current groups on one stage.

Sound good to you? Share this page on social media and let your friends know about Foals with Local Natives at PNE Forum.