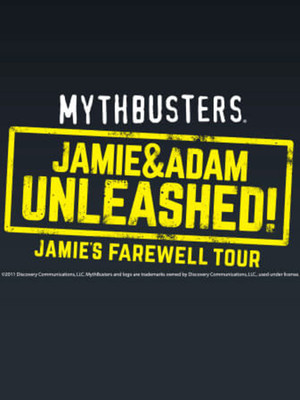 The hit touring show is the perfect farewell for Jamie

All-new for 2015, Jamie Hyneman and Adam Savage have revamped their live touring show and now bring you "MythBusters Jamie & Adam Unleashed", starring the two scientific daredevils! This promises to be an orthodox evening of on-stage experiments, guest participation, crazy video video and their entertaining behind-the-scenes stories. Join this dynamic duo, and if you are lucky, you may even be invited up on stage with them!

Since 2012, Jamie and Adam have toured North America, Australia and New Zealand with their original live show Mythbusters, based on their Emmy-winning series. So far the guys have presented their shows in 91 cities, given 102 performances, with over 200,000 people watching them onstage.

Sadly this will be Jamie's last touring gig as he will be retiring from the live shows at the end of 2015, however will continue to present the tv show. One of the most-watched shows on the Discovery Channel, "MythBusters" is now in its 13th season.

Suitable for all ages

A genuinely fun show filled with insights that you couldn't get anywhere... more

Sound good to you? Share this page on social media and let your friends know about MythBusters: Jamie & Adam Unleashed at Queen Elizabeth Theatre.